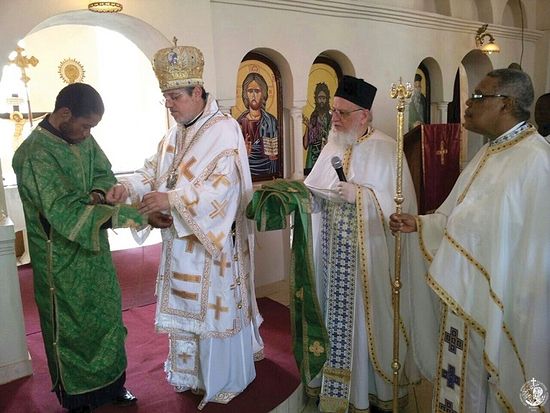 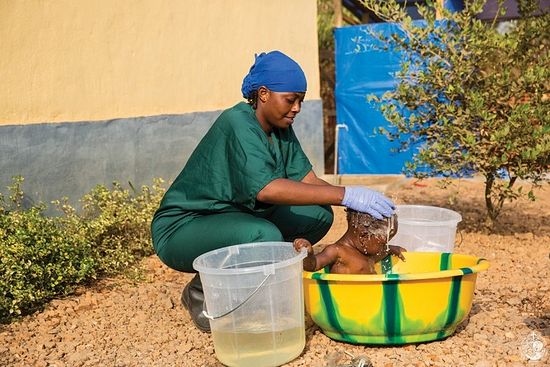 Since the day the worst outbreak of Ebola struck West Africa, the few airlines that flew there have greatly limited the number of their flights. Others felt it right to suspend air travel to West Africa because the cabin crew refused to put themselves at risk due to the outbreak, or due to decreased demand, or for fear of carrying the epidemic to the most developed countries!Therefore, for Freetown, capital of Sierra Leone, there are a limited number of options for access from Europe. There is only one flight a week from Brussels, very few to Morocco and even fewer to Côte d’Ivoire. After traveling for 24 hours, having in my luggage not only religious items and the bread and the wine for the Holy Eucharist, but also the protection and love of God as well as the wishes and blessings of His Beatitude our Pope and Patriarch Theodore II, I arrived in Freetown, under torrential tropical rain. Upon arrival, at the entrance of the small airport building, there were doctors and nurses waiting for us in order to check our body temperature and the vaccine certificates confirming that we were provided with the necessary vaccines (against yellow fever, meningitis and other diseases). There we were asked to complete a special form with our personal information and details about our plans (i.e., where we were planning to stay, which places we would be visiting, who we were going to meet and how we could be contacted by the authorities at any time.) We were also supplied with leaflets containing instructions for the prevention of the deadly virus. I personally avoided handshakes and greetings, following the safety instructions we had been given on the plane. The sun had already started going down, and the dusk was making people’s coldness and depression seem bigger. One could feel a sense of hopelessness all around due to the deadly epidemic that had struck the country and the problems caused by that.I went through the standard procedures quite easily and at the exit I was met by the driver of the Mission, who had arrived at the airport in the morning. Unfortunately Fr. Themistocles had not managed to catch the ferry that connects the cape where the airport is located with the capital. There is one peculiarity here. The airport is located at the one end of the bay and the capital at the other, but there is no road linking the two, only a floating coffin with two daily itineraries. If one wants to go to the mainland by road, they have to travel a distance of 350 km, crossing high risk areas with several Ebola outbreaks.

So we waited at the pier until 9pm that the ferry set off. If we did not wait patiently in the queue, we might not be able to board and have to wait for the next departure time, which was in the morning. The heat was unbearable, not to mention the humidity, which made the atmosphere suffocating. In the dark one could make out dozens of people with disabilities, beggars and needy moving around. They were all asking for help. No sooner had the country got back on track from the civil war than the Ebola epidemic broke out in order to ravage it. Thank God, we managed to board the boat. After one hour journey, we arrived at our destination. At the pier it was Fr. Themistocles and his companions waiting for me.

On the way to our destination, there was darkness and desolation. Due to the epidemic all the shops have to close at 6 pm to prevent people from moving around, thus reducing the likelihood of spreading the epidemic.

Briefing on the course of Mission work

With the daylight the city started waking up. Fr. Themistocles informed me about his activities, projects and especially the emergency programs he had started because of Ebola, i.e., distribution of food, medicines, leaflets and others, the most important being the erection of an orphanage to shelter the children orphaned due to Ebola.

There I had also the opportunity to hear about the many projects funded by the Orthodox Missionary Fraternity to support our newly-founded Mission, which we are grateful for.

During the solemn Divine Liturgy on the Monday of the Holy Spirit, authorized by His Beatitude Theodore II Pope and Patriarch of Alexandria and All Africa, I ordained Deacon Alexander Kamara Presbyter and the catechist Kyriakos Koroma Deacon. Kyriakos graduated last year from the St. Athanasius Patriarchal School in Alexandria and then returned to his homeland to help Fr. Themistocles in his pious work, sharing with his countrymen all the knowledge and experiences he gained in Alexandria, the center of Orthodoxy in the African continent. Our youth was very happy because a young man from their own land was being ordained Deacon. So great was their joy that they burst into cheers and applause. After the conventional admonitions to the young clerics, I conveyed to the congregation the wishes and blessings of our Patriarch and among other things, I underlined Fr. Themistocles’ heroic attitude during the epidemic, as he remained upon the ramparts defying danger in order to support his flock.

A few days later, during the Divine Liturgy that I celebrated at the Church of Ss Constantine and Helen, I ordained Deacon Kyriakos Koroma Presbyter and through laying-on of hands I made Frs. Eleftherios Edmonson and Vaios Chonsile spiritual fathers.

This Divine Liturgy was attended by the Minister of Social Welfare, who in his short speech referred to the large humanitarian work of the Orthodox Church in the country and stressed the fact that the President of Sierra Leone gave permit for an orphanage construction for the first time and he did so because of his trust and respect for the Orthodox Church, which has proved over the years that it has always been a selfless helper by the side of the wretched man under trial. What followed was the laying of the foundation stone of the orphanage in the courtyard of the Sacred Church of Ss Constantine and Helen. 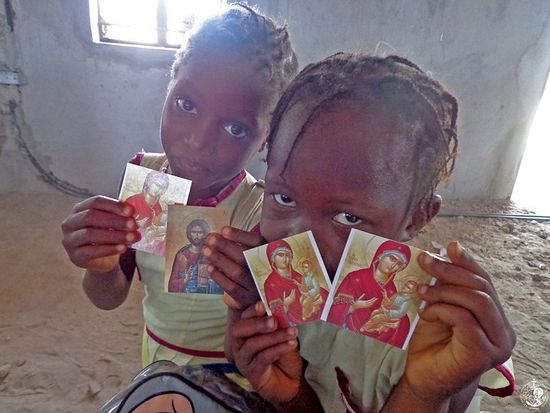 A meal of love for the entire congregation followed in the courtyard of the Orthodox Academy. During that I had the opportunity to talk to the teaching staff of the Academy and be informed not only about the students’ progress, but also about the future curriculum and operation of the Academy. Late in the afternoon, on the way to the Cathedral, I witnessed an Ebola outbreak at the central square of the city. A young girl was trying to balance with the help of two young men and was constantly vomiting on the street- obvious Ebola symptoms. Some panic-stricken people around her were trying to help asking others for assistance in order to transport her to hospital. I felt worried seeing so many people being so close to a suspected case of the epidemic but at the same time I wondered what was more human, “to support the patient who needs help or to comply with the strict instructions that say to stay away from suspected cases and immediately alert the relevant authorities”? Unfortunately that is the way the epidemic spreads, many people are afraid of being characterized as informers when they report an incident to the authorities, others simply defy the danger.

The time of departure had come. The flight was scheduled for 4pm. The boat was leaving at 8 am. Naturally, we were not able to catch it. There were two options: to travel either on a small speedboat or by road. Traveling by speedboat took 30 minutes, while by car 4 hours. Fr. Themistocles did not trust the speedboat. Personally I did not trust the car and the hinterland. We prayed to God asking Him to enlighten us to choose the best route. We went to the port, we looked at the speedboat again and again, did a lot of thinking and still feeling puzzled, we talked with other passengers that would travel on the same route; eventually we decided to take the risk. Our captain supplied us with the necessary life jackets and set off at the scheduled time. The distance was 18 nautical miles. The sea was calm, the sky cloudy. In the middle of the route a bang was heard and immediately the speed decreased. Probably it was a mechanical problem. The captain’s assistant tried to fix something in the engine, without success. So did the captain, without success either. They assured us that they were able to handle the problem of the central engine and that they would continue with the backup engine at a lower speed. Thank God. I think that most passengers were terrified. Hopefully with Saint Nicholas’ help we managed to reach the opposite bank. What a relief!

At the airport, we were screened for fever again and again. Papers, forms, identification particulars, cell phones, where we had stayed, where we had eaten, who we had met, whether we had attended a funeral. Even if one had no fever, one was likely to rise in temperature due to that incredibly tiring screening process and all those questions. We had been screened around 6 times by the time we boarded the plane. Once I went through passport control, a police officer told me that I should go with her to the aircraft loading area because they had noticed something strange in my suitcases. I was trying to think what that strange thing might be and ultimately I realized they meant the incense and the charcoal I had with me for Guinea and Côte d’Ivoire. Fortunately, all is well that ends well. At the last fever check before boarding the plane, we had the display recorded on the boarding pass, which we had to show upon arrival to prove that our temperature was the same.

About Mode of Life

Previous: Glenn Beck: The 1955 Pogrom of Constantinople’s Greeks and Armenians
Next: Homily on the Nativity of the Theotokos – St. John of Kronstadt

TO BE BLACK AND ORTHODOX: PART OF MY STORY